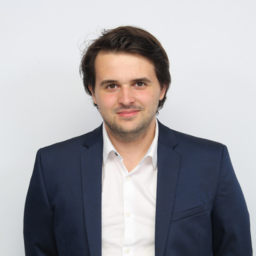 Initialization of neural networks isn’t something we think a lot about nowadays. It’s all hidden behind the different Deep Learning frameworks we use, like TensorFlow or PyTorch. However, it’s at the heart of why and how we can make neural networks as deep as they are today, and it was a significant bottleneck just a few years ago.

In this post, I’ll walk over the initialization part of two very significant papers:

To ease reading, I’ll be referencing to the two papers by ‘the Xavier paper’, the ‘Kaiming paper’, sometimes even only by ‘Xavier’ and ‘Kaiming’.

First, let’s setup the problem and understand why initialization is so important.

Important note: there’s quite a bit of LaTeX formulas in this post that need JavaScript to render. It might take a bit of time to load everything properly, and obviously won’t if you deactivated JS.

Why is initialization essential to deep networks? It turns out that if you do it wrong, it can lead to exploding or vanishing weights and gradients. That means that either the weights of the model explode to infinity, or they vanish to 0 (literally, because computers can’t represent infinitely accurate floating point numbers), which make training deep neural networks very challenging. And the deeper the network, the harder it becomes to keep the weights at reasonable values. We’ll see why that’s the case in the following sections.

The Xavier paper worked with neural networks with (only!) 5 hidden layers, but the effect is already very visible if no care is given to initialization.

Here’s the histogram of the mean values of the activations:

And here’s the histogram of the mean values of the backpropagated gradients:

As you can see, in this case the activation values tend to vanish, and the gradients are also vanishing (yes, vanishing, because remember they are computed backwards: from layer 5 to layer 1). And that’s only with 5 hidden layers! It’s clear we need a better way of initializing the network, that doesn’t lead to exploding or vanishing activations and gradients. That’s (one of) the contribution of Xavier initialization, that was later refined into Kaiming initialization.

The Xavier and Kaiming papers follow a very similar reasoning, that differs a tiny bit at the end. The only difference is that the Kaiming paper takes into account the activation function, whereas Xavier does not (or rather, Xavier approximates the derivative at 0 of the activation function by 1). Most of the math is adapted from the Kaiming paper, because I find it simpler and clearer. The main difference between this post and the papers is that this post is more detailed, so – hopefully – clearer to the uninitiated. It’s still a bit mathy though, no way around that.

Anyway, let’s get into it.

We’ll study first the forward-propagation case, then the backward one. They are quite similar but still sufficiently different that we need to do both. Then we’ll see if and how we have to take those differences into account. Finally, we’ll take a look at how better behaved deep networks become with Xavier and Kaiming initializations.

Note: when I reference an equation number, it’s clickable.

For each layer $l$, the response is written as:

Do you notice that $\boldsymbol{y_l}, \boldsymbol{x_l}$ and $\boldsymbol{b_l}$ are in bold? That means those are vectors. I know, it can be confusing. It’s to make you pay attention! Or so my teachers keep repeating to me… Anyway, here’s the definition of each term of this equation:

A few hypotheses are made on those vectors:

Under those assumptions, if we take the variance of equation \((\ref{eq:fwd})\) we get

Explaining where that result comes from will take a bit of math. If you don’t speak that language (or if you are feeling confident in me, or at least in Kaiming and his co-authors), feel free to skip to equation \((\ref{eq:fwd_var2})\) , you’re not missing out on a lot.

But because all the \(w_{i,j}\) and the \(x_i\) are independent from each other, the variance of the sum is the sum of the variances. Thus:

Following the exact same reasoning, albeit more simply because there’s no product, we obtain:

Pfiu. That was a mouthful. Let’s go on!

We now make one more assumption: that the random variable \(w_l\) has zero mean. After all, setting the distribution of \(w_l\) is what we’re trying to do here, so we can choose one that has zero mean. We can now further simplify equation \((\ref{eq:fwd_var})\) as follow (we also use once more the fact that \(w_l\) and \(x_l\) are independent):

Why doesn’t \(x_l\) have zero mean? That’s because it is the result of the ReLU of the previous layer ( \(x_l = max(0, y_{l-1})\) ) and thus it does not have zero mean. That is also one point on which Xavier and Kaiming differ: Xavier doesn’t take into account the activation function. As a result, from here on we’ll continue with the assumption that \(x_l\) is the result of a ReLU, as in the Kaiming paper, because it’s the more complex one. When we’re finished, we’ll look back to see what would have been different if we didn’t make this assumption, like Xavier, and we’ll see there’s only a small thing that needs to be modified. As a reminder, here’s the definition of the ReLU activation function:

And because \(w_{l-1}\) has zero mean and is distributed symmetrically around 0:

This formula is the one that lets us see what could go wrong without a proper initialization, and thus how to design the right one. The product is key. Indeed, if we have a lot of layers (so if \(L\) is large), we see that the variance of the last layer \(y_L\) could be very small (if \(\frac{1}{2} n_l Var[w_l]\) is below 1) or very large ( if \(\frac{1}{2} n_l Var[w_l]\) is above 1). The proper value for what’s inside that product should thus be 1, and that is exactly the sufficient condition the Kaiming paper (and initialization) takes:

The Kaiming paper accordingly suggests to initialize the weights of layer \(l\) with a zero-mean Gaussian distribution with a standard deviation of \(\sqrt{\frac{2}{n_l}}\) , and null biases.

Instead of the forward-propagation equation \((\ref{eq:fwd})\) we had, the formula of the gradient of layer \(l\) is given by:

Moreover, backward-propagation involves the following equation \(\Delta y_l = f'(y_l) \Delta x_{l+1}\) , where \(f\) is the activation function. Convince yourself of this by writing the partial derivation of the cost function. In the case of ReLU, which we use as the active function here, here’s the derivative:

One last assumption: \(f'(y_l)\) and \(\Delta x_{l+1}\) are independent from each other. Thus, taking into account that ReLU ‘halves’ its input, at least if the input is symmetric around 0, we have:

We now have everything we need to compute the variance of equation \((\ref{eq:bwd})\) , with the exact same reasoning we had with the forward case (remember the big matrices?):

Remember \(x_1\) is the input of the network, that’s why the above equation “begins” at 2.

Again, as before, this product is key to understanding why the right initialization is so important: if not set carefully, the gradient can explode or vanish, depending on wether \(\frac{1}{2} \hat{n}_l Var[w_l]\) is over or below 1 (strictly). Setting that number to 1 is important:

Thus we can choose a distribution with a standard deviation of \(\sqrt{\frac{2}{\hat{n}_l}}\) . Lastly, same as before, the first layer wouldn’t be at the same standard deviation because no activation function is used, but the small 1⁄2 factor doesn’t matter because it doesn’t get compounded over \(L\) layers.

Yay! We figured out backward-propagation!

So we have two equations very similar to each other that suggest a slightly different value for the initialization: \((\ref{eq:fwd_K})\) and \((\ref{eq:bwd_K})\) for Kaiming, and \((\ref{eq:fwd_X})\) and \((\ref{eq:bwd_X})\) for Xavier. One is the forward-propagation, the other the backward-propagation. Once again, the Xavier and the Kaiming papers take two different approaches. Xavier offers to just take the (harmonic) mean of the two (Xavier) initializations, which amounts to initializing the weights with a distribution of standard deviation of: $$\sigma = \sqrt{\frac{2}{n_l + \hat{n}_l}}$$

On the other hand, Kaiming argues that both \((\ref{eq:fwd_K})\) and \((\ref{eq:bwd_K})\) properly scale the forward and the backward signals. Indeed, if we compute the product of the quotient of \(n_l\) and \(\hat{n}_l\) over all \(L\) layers we find a constant that only depends on the number of channels at the beginning of the network and at the end. I’m not computing that number here because I didn’t detail what \(n_l\) and \(\hat{n}_l\) were in terms of the other parameters of the network. If you’re interested, take a look at the end of the backward-propagation subsection in the 2.2 section of the Kaiming paper. Anyway, that number isn’t at risk of making the weights or the gradient explode or vanish, so it’s safe to just use one of \((\ref{eq:fwd_K})\) and \((\ref{eq:bwd_K})\) . No need to compute the two cases after all! Aren’t you glad I didn’t tell you this in the introduction, and I made you read the whole thing?

First, let’s take a look at the contribution of Xavier initialization.

As a reminder, here’s what activations and gradients looked like with the standard initialization:

And here’s what they look like with Xavier initialization:

That’s way better right?! Now the values don’t seem to change at all! Well, to be fair, in the activation graph layer 5 seems a tiny bit below layer 1, but hey.

Indeed, the Kaiming paper compares the convergence of Xavier initialization and Kaiming initialization, with a 22-layer model and with a 30-layer model, with ReLU as the activation function in both cases.

Here’s the graph for the 22-layer model: 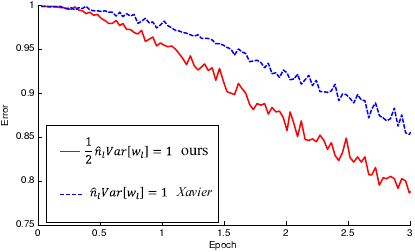 Here’s the graph for the 30-layer model: 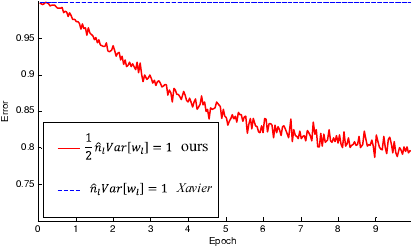 In this case, Xavier initialization doesn’t even converge! This graph in particular highlights the need for Kaiming initialization if ReLU is used (and it’s kind of always used nowadays). This effect would be even worse for deep networks.

That’s it! I hope you liked my synthesis of Xavier and Kaiming initialization , and that it has helped you to understand them both.

Feel free to reach out to me on Twitter or by email if you have any question or suggestion (or if you find a typo).